Ortiz enlisted in the United States Army in 1987 as a Chemical Operations Specialist as a Private First Class. He was certified as an NBC Reconnaissance Specialist and was assigned to the 11th Chemical Company in Nellingen, Germany. He deployed in support of Operation Desert Storm and Desert Shield. Upon his return, he was assigned to 1st Infantry Division in Fort Riley, Kansas. He attended Officer Candidate School in Fort Benning, Georgia, and was assigned to Fort Bragg, North Carolina, where he served as Battalion Chemical Officer (1/321 FAR).

Colonel Ortiz has served as a Platoon Leader, Executive Officer, Brigade Chemical Officer, Operations Officer, and other astounding leadership roles. He has also received numerous awards, including a Bronze Star. This event is open to the public. For additional details about Colonel Ortiz’s’ service see article in Pine Bluff Commercial:  https://www.pbcommercial.com/news/20180707/ortiz-to-assume-command-of-pb-arsenal-july-18 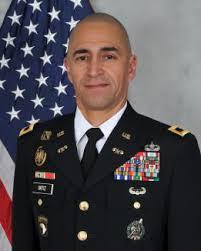